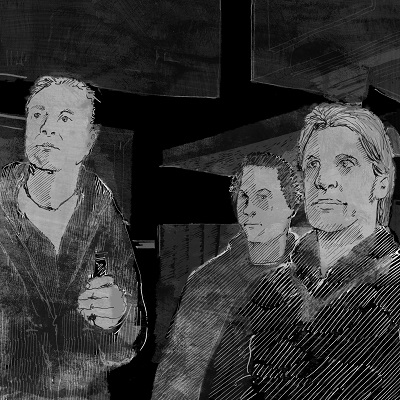 MELANCHOHOLICS were a three-piece band, consisting of minimal guitars, low-end bass and lo-fi electronica. The only consensus was to create slow, impressive soundscapes. Their sound-mix rounds up with object recordings and processed field recordings. In this changing mix of sound sources used, the guitars remain as an constant element.

The journey started 2001, three years after guitarist Benedikt and bassist Philip met by coincidence on a bus trip. The Band was founded in Düsseldorf, homebase of electronic-experimentalist Lutz. First Gigs were played in 2002. The debut album “Melanchoholics s/t” came out in 2003. The album was defining the foundations of Melanchoholics' sound: a low-end manifesto for low-end connoisseurs. The band also did several collabrations with different video artists and filmmakers, such as Francis T. (CAN; 2002) and Emanuel Strixner (GER, 2006).

“A Single Act Of Carelessness”, released on 6th. June 2006 (6:6:6) on Multinational Desaster Records lifted the music to another even more experimental and minimalistic stage. The first vinyl release by MELANCHOHOLICS “Masking My Monkeys (EP)” was released via the high profile Drone Records label in December 2009. Press reactions to all releases have mostly been extraodinary.

All in all 50 Gigs in nine countries all across europe and abroad helped Melancholics to make a name for themselves as heavyweights of Germany's dark ambient underground. On the road between they shared stages with artists like Alix (I), Aube (JAP), Aidan Baker / Nadja (CAN), Debris Inc. (USA), Hecate (USA) Milhaven (GER), Moloch (GER), Multer (GER), Nplmd (CZ), Solstafir (IS), Skalpell (CH), Sigtryggur Berg Sigmarsson (IS) and Troum (GER). Besides Germany they played countries like Austria, Czech Republic, Croatia, Latvia, Lithvania, Norway, Slovenia, Switzerland and even Iceland.

Benedikt died of cancer at the age of 32. Melanchoholics managed to complete their last album shortly before Benedikts departure as a three-piece. The After Benedikts death, the final album Solar Café is the harbinger for Minus1One – where Lutz and Philip will go ahead into exploring precious sounds.

Philip & Lutz can be contacted via